Alan and Heather starred in the epic parting of the vegetative ways at Blackruthven, behind Noah’s Ark (the children’s activity centre) on the western edge of Perth last week. About 450m of path was cut back, appreciated by at least 10 people who passed by while we were there. (So no doubt hundreds more in time.) We came across a few orpines or livelongs, a type of sedum – very pretty – buried in the undergrowth. The ranger stupidly did not think to take a picture – does anyone have one of this plant that they can send in? The pictures show before, after and battle commencing. 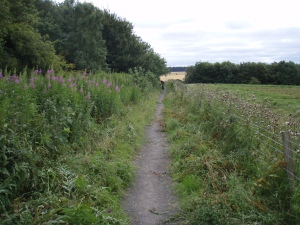