Take a Pride in Perth & Kinross Association are celebrating their 20th anniversary this year. To get the festivities underway the Association held a Garden Party at Perth Racecourse on Friday 1 June.

Past and present members of the 48 ‘bloom’ groups currently operating across the Perth & Kinross area turned out in their finery to enjoy the afternoon and we were honoured to be joined by the Provost and Deputy Provost.

Everything was perfectly planned – but this being Scotland, the weather didn’t co-operate! Not long after the formalities got underway a thunderstorm hit with rain in the proverbial biblical proportions. The lightning blew out the power in our marquee so our carefully laid plans had to be swiftly revised, but us ‘Bloomers’ are made of hardy stuff, our community spirit came to the fore, so a great time was had by all!

Congratulations not only to the winners of the Best Hat competition, but also to everyone who entered for brightening up the marquee!

Our thanks (and sympathies) to founder member Euna Scott, whose excellent presentation was cruelly cut short, and to the Rock Choir who had to perform ‘acapella’ and did so absolutely brilliantly.

Thanks also to Fergus Cook aka ‘David Douglas’, to cartoonist Neil Smith and to our organising committee aka Bill, Elspeth and Caroline.

Photographer Ian Potter of LightPress Media & Design also did a brilliant job despite impact of the weather on light levels, and his excellent a photo album of the event can now be viewed on Beautiful Perth’s Flickr site.

We couldn’t get the planned group photo because of the conditions, but copies of the other event photos are now available – go to the Flickr site (click the link above, hover mouse over the picture you want and you’ll see the photo number;  email monica@beautifulperth.org with the number(s) you want and she will forward them to you.

Pictures (from left): Before the deluge; Provost Melloy; (below) Hats! 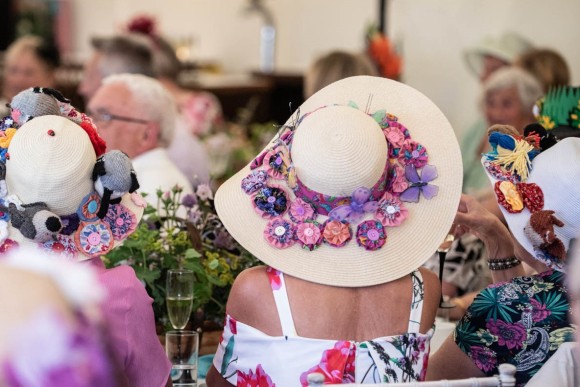