On Thursday I met with some members of the Portmoak Paths Group to find out a bit about the work they are doing. We went to the paths on the hillside above Kinnesswood with the intention of de-berming some of the paths. Sharing the paths with the many walkers, joggers and cyclists are also some cattle. The intensive use of these paths combined with the heavy footfall of the cattle has resulted in trench-like paths with banks on either side. This creates small gulleys in which streams are formed after any rainfall, further eroding the paths. 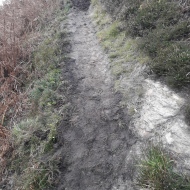 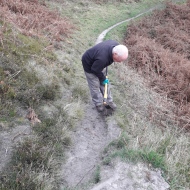 Removing the banked sides of the paths and filling in the trenches had the effect of widening the paths and allowing water to flow off rather than along it. The result should be a reduced rate of erosion, less standing water (and therefore less mud) and paths that are easier to walk along.

In addition to the levelling out of paths the group also remove encroaching gorse and brush, cut back vegetation and carry out maintenance on a variety of paths in the area. There is always more to be done, as the path maintenance is an on-going but rewarding effort.

If you would like to join the Portmoak Paths Group, they would love to hear from you! They tend to meet every Thursday at 14.00 in the public car park in Kinnesswood (near to Portmoak Primary School). To get involved contact Greenspace Ranger Calum Bachell at cbachell@pkc.gov.uk