This working partnership used this event to launch the ten week block of dementia friendly sessions, for early spring 2019.  The theme is life cycles, looking at Butterflies and plant life cycles.  These sessions will be open to all and will be a mix of indoor and outdoor time, with time for a cuppa and chat.

The event was very inspiring and full of use full tips, which we and other organisations will be taking.  So if you have any ideas or suggestions how to make Aberfeldy’s greenspaces dementia friendly and therefore friendly to all please do get in touch, jgrant@pkc.gov.uk .

Dementia Friendly Aberfeldy Launch Event
The purpose of the event was to establish if there was appetite within the community for Aberfeldy to work towards Dementia-Friendly status.
The event was well attended with 72 people taking part, including speakers.
There were essentially two parts to the event. The first part explored already established dementia–friendly communities nationally and internationally. The second, a Market Stall section that functioned as folk were gathering, but which was set up the whole time, in which 16 organisations were able to show and tell their work in this area.
There was clear support for taking the concept of Dementia-Friendly Aberfeldy forward and the next steps were outlined by Janette Barrie.
If interested in supporting the group, please get in touch via the e-mail address
janette.dfag@gmail.com

The school group have been busy since the start of the year.

The winter weather looked like it was going to snow the group off but the pupils were given the option and decided they would still like to go out! So we headed to the park to carry out some tool maintenance. The group have been learning about all the different tools and how to maintain them,  they are now so skilled they tell me how its maintained! The weather did progressively get worse so we did curtail the task as pupils started to get a little blue!

Group working on the broom up the Knock

drainage (just in time for all the snow melt and rain that we had!). They really enjoyed this task and even asked if they can do it again which is really positive. Ensuring the drains are clear prevent the risk of the paths flooding so its important that we keep them flowing.

Finally this week the group were up the knock carrying out some of the broom management as part of the forest management plan. We were using tree poppers which are a useful tool that remove trees and shrubs from the roots. This is a task the group had done before so they are well versed in it and put in a great effort to finish off the section that we hard started before. Removing the broom is important as it acts like an invasive, takes over and out-competes other vegetation such as trees.

The group are going to be looking at some more drainage work, some path maintenance work and some willow weaving soon! 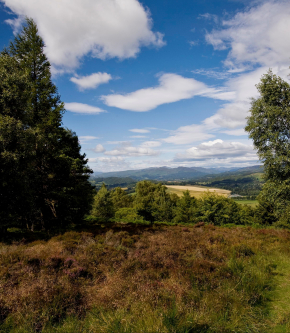 We have been working hard on our plan to improve the Knock have come up with a Draft Management plans and we want your opinions! We need your help to make the Knock the place the community wants it to be.

This is your opportunity to have your say!

Work to improve the footpath along Lady Mary’s Walk by the side of the Turret Burn, has been progressing extremely well despite the wet weather. The path improvements are all down to the efforts of a very active group of volunteers who formed the ‘Friends of Acorn Dell’  a few years ago with the aim of repairing the section which runs through the community owned land.

Under the direction of the Crieff Community Trust and along with The Perth & Kinross Countryside Trust & PKC, the group has raised substantial funds to make this happen. A major part of the funding came from PKC’s Community Environment Challenge Fund which voluntary or community organisations can access for projects which could make a significant difference to the local environment.

Typical criteria which the fund requires are “Benefits to the wider community”, “Link to other regeneration initiatives” and “An ability to complete the project within 12 months” all of which the Group were able to meet.

Crieff Community Trust have an excellent site at http://www.crieffcommunitytrust.org.uk/ where you can read more about the progress of the path and how to get involved in the projects set out in the Crieff Community Action Plan

For more information about the fund and how your community can apply for support visit http://www.pkc.gov.uk/CECF

Established in 1997, Perth & Kinross Countryside Trust support a wide range of projects across the area.