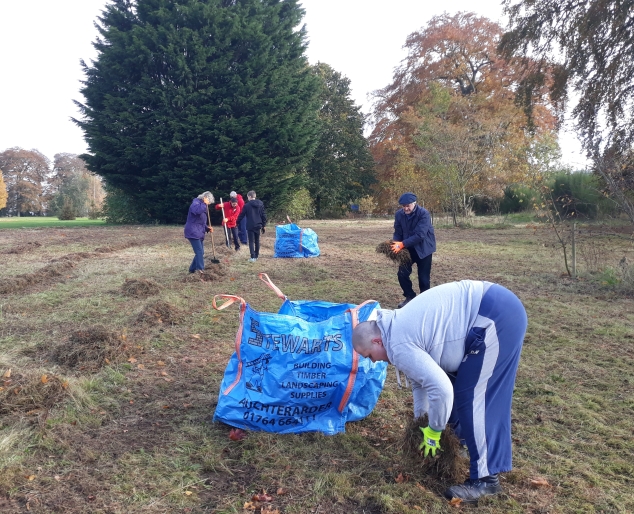 Volunteers from Wisecraft in Blairgowrie recently helped give the Wildflower Meadow in Larghan park its Autumn makeover. The meadow is an important feature in the park, creating great habitat for pollinators throughout the summer months.

Now Autumn is upon us the meadow is cut and raked to help spread the seed while the cuttings are lifted by keen volunteers. Lifting cuttings helps our wildflowers thrive by removing the nutrients from the soil.

Its is hoped the work will contribute towards the John Muir Award which the group are currently completing.

This summer has seen a huge amount of weed growth across all of Perth and Kinross. Needless to say, the Lade in MacRosty Park is no exception, as several weeds including Burrweed and Duckweed took over in a short space of time.

On a couple of occasions over the last few weeks some eager volunteers have helped Calum to remove the bulk of the weeds and cut back the encroaching vegetation. Along the way we have found a host of different invertebrates, amphibians and even a dead brown trout (although we’re not quite sure how it got there!).

To give the amphibians and invertebrates the best chance to return to the water, the removed weeds were stacked next to the Lade and will be removed a few days later.

As a result the Lade looks much improved, and the water is running far better.

Recently we have been working with Crieff High School to get some of the pupils out in to the park and learning and developing new skills in the outdoors. The tasks have ranged from weeding of the flower beds and maintenance of the hard surfaces, to cutting back vegetation from the footpaths and tidying up around the pavillion

This week the group have been raking the wildflower areas that were cut by PKC grounds maintenance squad (which is appreciated greatly). The group managed to get one whole area raked off which is brilliant!

There were some issues with dog fouling and the group are going to look at how we can make people aware that the wildflower area is maintained and that try and encourage people to collect their dog mess in the future.

The group are looking a building there skills and may look to do some rural skills in the new year.  They are also going to look at some new and exciting projects in the future.