I am reporting on a very successful collaboration between Farmer, Upper Tay Path Group, Rural Skills (at Breadalbane Secondary) and Perth & Kinross Community Greenspace which has seen works to help and protect a stunning wildflower meadow within 10minutes walking distance of Aberfeldy.

The issue for a number of years has been compacting of soil where people walked through the meadow and nutrient enrichment where people have not picked up after their dogs.

The Rural Skills students built a short section of fence to block off one of the entrances to the meadow.  This hasn’t worked so the Path Group got the path that is to be used mowed.  The path was widened by cutting back the Blackthorn and the cut branches were used to barrier the other entrance to the meadow.  Waymarker posts were installed and a temporary signage installed.

It is hoped that the Rural Skills can produce a signage and funding is to be sought to highlight what is growing in the meadow.

This working partnership used this event to launch the ten week block of dementia friendly sessions, for early spring 2019.  The theme is life cycles, looking at Butterflies and plant life cycles.  These sessions will be open to all and will be a mix of indoor and outdoor time, with time for a cuppa and chat.

The event was very inspiring and full of use full tips, which we and other organisations will be taking.  So if you have any ideas or suggestions how to make Aberfeldy’s greenspaces dementia friendly and therefore friendly to all please do get in touch, jgrant@pkc.gov.uk .

Dementia Friendly Aberfeldy Launch Event
The purpose of the event was to establish if there was appetite within the community for Aberfeldy to work towards Dementia-Friendly status.
The event was well attended with 72 people taking part, including speakers.
There were essentially two parts to the event. The first part explored already established dementia–friendly communities nationally and internationally. The second, a Market Stall section that functioned as folk were gathering, but which was set up the whole time, in which 16 organisations were able to show and tell their work in this area.
There was clear support for taking the concept of Dementia-Friendly Aberfeldy forward and the next steps were outlined by Janette Barrie.
If interested in supporting the group, please get in touch via the e-mail address
janette.dfag@gmail.com

Storage space for any Volunteer group is a luxury!  It is not only what type of storage is needed, but also how to afford it.  In 2017 BRAN (Blairgowrie and Rattray Access Network) donated their second hand shed to the Pitlochry Path Group.  Luckily for the group a home was found in Pitlochry Recreation Park.  Although, this seems a simple process the transportation, landowner permission etc. all kept the Community Greenspace Coordinators on their toes!

A grateful as the group was with the donation, it did not come with its own issues – rot! Again this does not come cheap to resolve!  With assistance from Pitlochry Pavilion User Group work could progress in fixing the shed.

Finally, a joint task day was done to sort out a little rot issue.  As ever it was not that simple, thankfully determined volunteers and a loan of some tools the group got there in the end!  All it now needs is a paint job.  If this good weather continues the shed will hopefully look five years younger, shortly! 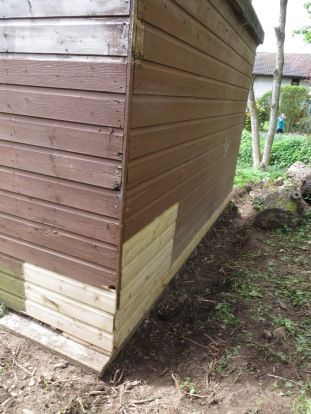 For a number of years there has been a partnership between Abernethy Trust – Ardeonaig Centre and Perth and Kinross Council. Participants from Ardeonaig help the Community Greenspace Ranger to complete Forest Plan works in the Birks of Aberfeldy and with Path Groups.

For the second year running the “Gappies” who work hard behind the scenes at Ardeonaig are getting the opportunity in completing their John Muir Awards.  This has also therefore involved a couple of trips to the Birks of Aberfeldy. In their own words…..

Team involvement in the John Muir Award at Abernethy Ardeonaig

The first part of the John Muir Award is to discover a wild place. Loch Tay is a large beautiful loch surrounded by an inspiring mountainous landscape with stunning trees scattered around it. In exploring it, we have canoed and kayaked on it, giving us hours of fun and entertainment. It is easy to see just how appealing the area is at first glance, as the shimmering water is virtually begging for attention. Here at Ardeonaig we have the privilege of having such a wonderful natural spectacle right outside our front door!

When people think of conservation, they tend to think about making or introducing something to the area to help it along, but we conserved the area by doing the opposite. We got rid of beech trees because they prevent other trees from growing properly. Beech trees are a massive problem at the Birks because they tend to dominate other species of plant and they multiply quicker than other trees. Jeannie gave us the tools to get rid of the beech trees that cover the paths and disrupt other trees from growing. We used tree poppers to get the trees out of the ground and used many types of saws including a bow saw and pole saw to cut down branches that are in the way of the path. The best tool to use was the tree popper because it took out the roots from under the ground so prevented more trees from growing. This could be quite hard work and a lot of the time you also needed to use a spade to help get the tree out of the ground.

One of the trees we were protecting was an oak tree sapling that had been damaged by a deer. We used some of the branches that we sawed off the beech trees to put around the little oak tree. We also helped protect a monkey puzzle tree by cutting back the trees around it to let more light in.

After quite a while of pulling out trees and cutting down branches we had cleared quite a bit, so we moved on to something different. We split into two groups and we both had to make a natural shelter out of whatever we could find. Then we learnt how to make fires in Kelly Kettles when out in the wild.

When we got back to Abernethy Ardeonaig, we took some of the baby beech trees and planted them in our grounds here. They are in the raised beds by the tool-shed, and in the future they will be planted in the hedge near where the archery range is. This is to help stop children from getting too near the maintenance zone when they are playing in the grounds.

It was a really good day and it was a great feeling of taking responsibility for our surroundings and knowing that other people and nature will benefit from our hard work.

Finally, to complete our Discovery Level Award, we prepared a presentation on what we had done, with anecdotes and photos, and presented it to the rest of the Abernethy Ardeonaig Team. 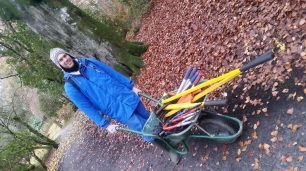 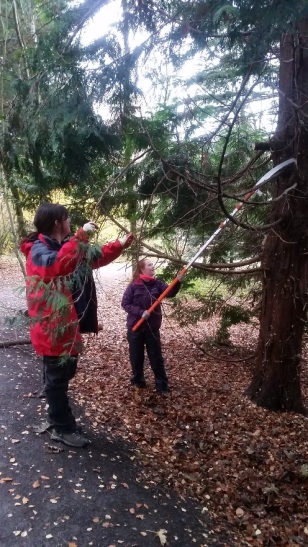 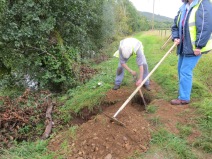 The Upper Tay Path Group have always managed to get all the work completed without having organised task sessions.  However, with the exceptionally good growing weather, recent flooding and other issues cropping up, it has come to a point where it was required.  So over a short period three very different work parties happened.  In their own words the accounts are as follow;

Work is in progress on the Riverside Path (Wade’s Bridge to Comrie Bridge) and Camserney to Dull Path:

On 18th August a group of fifteen male and female  students from Spain, Germany and Scotland  together with three leaders put in a tremendous day’s work on the Riverside Path cleaning four bridges, staking and marking dangerous holes on the Lurgan Farm section(see below) and cutting back intrusive branches etc.

It was a damp day but using equipment provided by Jeannie Grant (PKC Greenspace Ranger)the students showed great determination and concentration.  Our thanks are due to them.

The bridges are now ready for some minor repairs during which the uprights will be capped. Subsequently the timbers will be treated with a preservative.

On 8th September, members of the recently established volunteer Path Maintenance Group undertook their first working party.  They filled a substantial series of holes which we believe were started by a combination of small animals and flood water and then, probably, adopted and enlarged by beavers. We are grateful to the landowner for both providing the material and transporting it adjacent to the holes.  Additional pruning and lopping was also undertaken.

On 12th September, a group of pupils from Breadalbane Academy who are studying for a Rural Skills qualification, lead by Mr. Dougie Woodrow and supported by Jeannie Grant, cleaned the large wooden “horse” bridge at the Camserney end of the path and cut back nearby vegetation. A second visit will be scheduled to finish the job.

We are again very grateful to the students and hope that there will be further opportunities for them to practice their skills on path maintenance work.

As spring finally arrives the Aberfeldy Putting green is finally open again.  To get to this stage the group have been doing various tasks such as cutting back the overgrowing borders with assistance from Community Greenspace, planting up numerous tubs and planting bulbs.

During the first month of the new season the putting green in partnership with Community Greenspace will see two beds planted up.  This does mean that the stunning daffodils will need to be relocated so that they can provide a display prior to the new bedding plants.

If you wish to volunteer with the planting or with the running of the putting green please contact aberfeldyputtinggreen@gmail.com or 07756088569 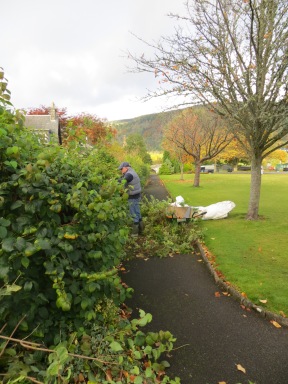 It is not often that a Ranger sees the process through from creating a bird box with the public all the way through to it being put on a tree and hopefully in use!

In May 2016 the Community Greenspace Ranger in the Highland area supported the Cairngorm Park Nature Festival weekend by running a bird box building session.  These bird boxes were then installed by the Scouts from all over Europe during the Scout Jamboree hosted by Atholl Estates.  It is hoped that those that created the boxes will easily recognise their boxes whilst using the paths around Blair Atholl! It would be great to hear if the boxes are being used.

The finished boxes, all with their own “identification” markings. 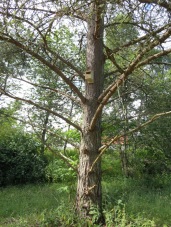